The Sri Lankan batik industry is making a strong comeback and is poised to be a US $ one billion export earning industry in two years. One of the pioneering legends in the industry, Eric Suriyasena said that the main reason for business to rebound is the growth in tourism. “With tourism picking up there is a tendency in sales picking up locally as well,” he added. He said that currently the trade’s earnings are around US $ 300 million and the main sales are overseas. 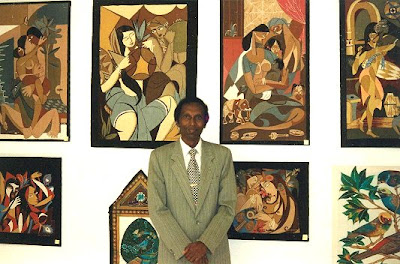 Suriyasena, Chairman of Eric Suriyasena Batiks (Pvt.) Ltd, said that another positive trend is that Batik is once again in fashion and even the younger generation is keen on it. Even in local and international beauty pageants batiks have got its due recognism once again.

In addition, unlike two decades ago, today there are many new designers and this too helps the industry to grow. The industry which was formerly confined to a few items today has a wide range which includes household items and bed linen as well giving more choice for the customer.

He said that one of the biggest problems they faced is the low quality imported finished batik products from neighbouring countries. “Due to this some Sri Lankans also tend to manufacture low quality products which is a major threat to the industry. What the government should do is to increase the duty on imported batiks which would safeguard the local industry,” he added. 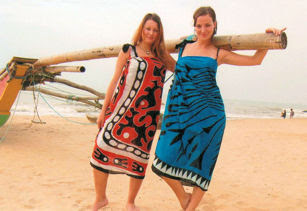 A leading exporter of batik art and batik garments, Suriyasena has showcased his artwork in such countries as Sweden, Norway, Australia, USA, Austria, Germany, Canada, Italy, and the United Kingdom. “I am hoping to have another international show in Sweden this year,” he said.

Eric Suriyasena Batiks has also invested over Rs. 30 million to open their modern flagship art gallery Marawila that will be opened on Friday. “This is bound to be a major tourist attraction as there would be live demonstrations as to how batiks are being created,” he added.

Suriyasena who is also the Chairman of three star plus Goldi Sands Negombo said that over 350 are employed with Suriyasena Batiks.

A unique aspect of Eric Suriyasena’s work is the full spectrum of colours used in his artwork. All the final pieces have been boiled out at least minimum four times and usually many more times. Each time the wax is boiled out, he introduces a new primary colour and with overlaying of colours is able to achieve the entire colour spectrum in each piece.

InvestSriLanka
Since the dawn of peace in 2009, Sri Lanka's investor-friendly economy has been growing at over 6% per year. The recently elected government is fully dedicated to good governance and transparency, and has already reconnected the country to the wider world and attendant opportunities. InvestSriLanka highlights investment potential of Sri Lanka by bringing current business information to the reader. We represents a firm of professionals committed to bring in quality investments to Sri Lanka in Leisure, Finance, Real Estate, BPO, Education, Agriculture and Alternative Energy. Let’s start our dialog. Please contact: investsrilanka@gmail.com